I just wanted to be cool.

Now that I am approaching 58, perhaps as a result of my many years of psychotherapy or perhaps by grace of my living with someone who tells me every day he loves me very much, I feel about as cool as I need to be. Which is to say that I no longer really feel I need to be cool. And, I don’t think cool is the essence of what I was longing for – for decades. No. What I needed all along those decades of desperation (and depression), and what I indeed feel now, at long last, is a sense of connection. Today, above all, I feel a deepening and widening sense of connection with myself – or more accurately, with the parts of myself that I tried to bury or hide from for so long, because THEY were not cool. Rage, sadness, loneliness and shame.

Cool is in the eyes of the beholder – admirers, those who are envious. I was one of those who was envious. I wanted to be like one of the cool people, one of the A-list, one of the admired. And so I would imitate, or more like it, I would try to imitate – naturally without believing in myself in the process. What I believed instead was that I was a wanna-be, a fraud. While I really wanted to be a part of the crowd, in reality, I felt apart from the crowd, even if I was in their midst, and surrounded by them, and doing stuff with them, and dating them, and even sleeping with them. I felt apart. And in essence, I was apart, but not from them. I was apart from myself. I harbored a deep-seated feeling that I was not worthy, that I was not really particularly likeable, much less loveable.

The cool people weren’t perfect. But I discounted their flaws as inconsequential. They were still cool. I believed my flaws were too many, too overwhelming – and as a result, I didn’t feel at ease in their presence. I always felt out-of-place – pretending as if I were, when inside I was telling myself I wasn’t. Trying too hard to fit in while feeling inside that I just didn’t belong. And not being able to figure out why, but instead feeling badly about myself for feeling badly about myself. Ugh, it was quicksand.

The Gifts of Imperfection by Brené Brown 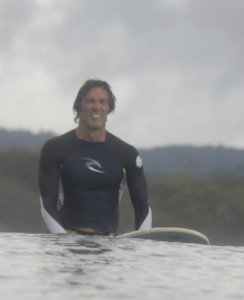 I stayed out of the water for three months after my near drowning in Costa Rica. It was at a reef break a mile offshore in 9 foot waves – waves that jacked up quickly and broke unpredictably left and right just as fast. The boat had to stay a quarter of a mile away in order not to risk getting swamped by the swell. I got caught on the inside after the first of a short interval 3 wave set – no sooner had I popped up from the second wave that I was hammered by the third and held down for as long as I had ever been held down.  I can remember saying to myself as I was churned underwater, “go with the flow, relax, stay calm.” And I did go with the flow. I did relax. I did stay calm. And then I didn’t. I couldn’t any longer. No air. Instead, I thrashed to get to the surface, pushing to get my head out of the water. Back on my board, breathing again, I had nothing left. Or at least I felt I had nothing left. Nothing left to get me over the oncoming swells and back to the boat – which looked so very far away – and with no one to come to my aid. Evidently I made it. But the eventuality of my getting back to the boat was not obvious to me at the time. I was terrified for my life. Terrified.

I got back in the water at home in Santa Cruz for the first time earlier this week and stayed for 15 minutes. I went back for a 20-minute session yesterday. First wave was great. Nice smooth drop-in on a 3-footer and a ride down the line. As I paddled back out, I turtled my board to get beyond a breaking wave, but the force of the lip smashed the board against my forehead and I came up hurt and dazed.

Surfing is not a sport for the delicate. Nor is it a sport for those unwilling to own the collection of scars that will be acquired through an inevitable sequence of slices and slams. And it’s not necessarily a sport for the self-professed or closeted masochist, either. But regardless the slings and arrows of my outrageous fortunes on the water, I do go back. I paddle out for another wave, another ride, another rush, and invariably another encounter with reckless abandon.

Most days I do stay away.

There’s a swell today. It looked big this morning. Maybe it’ll be a little more forgiving this afternoon.